WasteShark is a boxy, 5-foot 2-inch-long aquatic drone cleaning up plastic waste in a pond in Rotterdam, maybe a solution to clean plastic waste in the water. Known as the WasteShark, the device is an aqua drone that removes plastic and debris floating on water surfaces. According to RanMarine Technology, the drone is capable of holding 42 gallons of trash and other floating debris. It can also mop up plants and algae floating on water and operate for eight hours after a single charge.

“So we wanted it to be as easy to deploy as possible, as easy to capture the trash and bring it back to land, make it safer so that the operator is stood on the shore rather than was in the water, make it battery operated, so it was zero emissions, not diesel or fossil fuel-powered. And it was easy to store away,” said Richard Hardiman, the CEO, and founder of RanMarine.“A lot of the time our customers have bigger boats that need a captain and a lot of maintenance and a lot of mechanical movement to make them work. We wanted something very sleek, very simple, get the trash out and start recycling faster than what has been done right now,” he added. 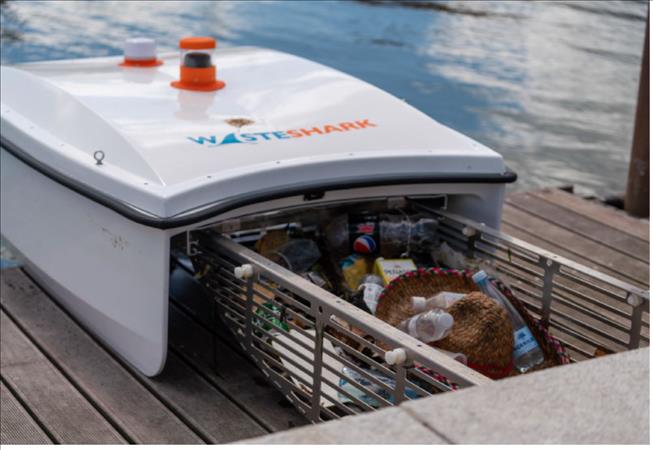 More on the WasteShark

The concept inspired by the whale shark, the majestic creature that swims with its mouth open is revolutionary. “The WasteShark was based on the whale shark, which has a large mouth for capturing its prey. So that’s why we have two pontoons, one on each side. So that the waste can come in from the front. And it gets trapped in between the pontoons,” explained Tessa Despinic. Despinic is the design engineer of the miraculous product. According to the developers, they were successful in selling over 40 aquatic drones. With the price starting from $25,600, the basic model comes with a manually controlled option. Higher-end models are programmable.

This is one of the many techniques present for reducing the plastic waste problem . As trash is washed away, thrown, or blown into waterways, storm drains close up or carry them forward.“ Once plastic or trash ends up in the ocean, it’s very hard to collect because it does break down. And so it gets smaller and smaller and it’s just hard to get out to our big open oceans and collect the trash there. We’d much rather collect that trash closer to shore, which is easier, it’s less costly,” stated Nancy Wallace. Wallace is the director of the Marine Debris Program under the US National Oceanic and Atmospheric Administration

“The most important thing with marine debris or plastic or trash in our ocean is we don’t want it there in the first place. So while all of these devices are incredibly helpful, we need to work on the upstream solutions of generating less waste from the consumer standpoint, but also the industry standpoint. And so there’s a lot of different players that are going to help solve this problem overall,” added Wallace. Ocean life is declining due to rising temperatures, plastic debris, and human interference. This waste trapper is possible a way to help them.

Read article by Menafn on this link.