A Drone Army Is Rising Against Ocean Plastics

Solutions to remove garbage from the sea have boomed in past years, but a lot more is needed to end plastic pollution 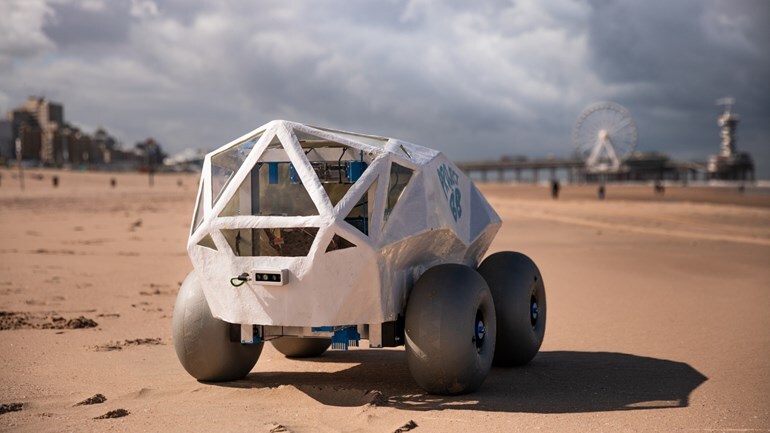 The garbage-collecting BeachBot rover during a demonstration at a beach in the Netherlands. Source: TechTics/Project.BB

Floating drones inspired by whale sharks and four-wheeled robots that resemble the Mars rover are among the latest inventions designed to remove litter from the oceans.

The number of tools to monitor, prevent and clean up ocean pollution has grown almost exponentially over the past four years, according to a paper published in Nature Sustainability. The research, led by biologist Nikoleta Bellou at the Institute of Coastal Research Helmholtz-Zentrum Hereon, is the most comprehensive analysis of sea-cleaning solutions to date.

“Unfortunately more focus at a policy level is being given to banning single-use plastics,” Bellou said. “But we already have polluted the oceans and we need to do something to retrieve that, simultaneously to all the actions needed to reduce pollution at the source.”

Chemicals, fossil fuels and plastics are present in all of the world’s oceans and have been found both at the surface and at the bottom of the seas. Marine litter threatens the survival of wildlife such as seabirds, whales, fishes and turtles because they can get tangled in it or confuse it with food. Tiny pieces of plastic known as microplastics can make their way up the food chain, eventually ending up in human bodies.

As many as 91 million metric tons of litter entered the oceans between 1990 and 2015, as much as 87% of which was plastic, according to the research. An estimated 5.25 trillion particles of litter are currently floating in the oceans.

While the impacts of polluting the seas were reasonably understood by the end of the 1980s, it wasn’t until 2016 that solutions to address the problem really took off. Of the 177 methods analyzed by Bellou and her colleagues, 73% were only developed in the past four years. Most approaches so far address monitoring, with only 30 aimed at clean up, the research found. Most focus on large litter floating on the surface, meaning microplastics at the bottom of the sea remain an unresolved issue.

Funding soared in 2014 after the European Union launched research programs such as the nearly 80 billion-euro ($97 billion) Horizon2020 initiative. About half of the ocean projects available today were government-funded, while a third were paid for through collaborations between nonprofit organizations, the public and companies, according to the paper.

The new research, which doesn’t reveal which specific projects Bellou and her team analyzed, points to a wide range of inventions—and the challenges of scaling them up.

Solutions invented over the past few years include sea garbage bins, giant plastic-collecting barriers and a marine drone that collects floating garbage through a wide opening that mimics the mouths of whale sharks.

There’s also BeachBot, a garbage-collecting rover that picks up small litter like cigarette butts, single-use cutlery or plastic bottle caps from beaches. Creators Martijn Lukaart and Edwin Bos sought the help of students at University of Technology Delft in the Netherlands to develop an algorithm which teaches the robot to distinguish between types of trash.

“It’s nice to develop a robot solution, but that’s not the solution to the wider problem,” Bos said. “Behavior needs to change and our goal is to make people interact and engage with the robot to make it smarter, but also to learn about the impact of litter themselves.”

A BeachBot prototype has been deployed in several locations in the Netherlands and the two entrepreneurs say they’re ready to move toward launching the product. The next challenge is to find the right business model to ensure BeachBot doesn’t just clean, but also educates the public and changes behaviors.

Despite recent efforts, a lot more will be needed to make a dent in ocean plastic pollution, Bellou’s paper concluded. Plastic production and waste accumulates faster than the inventions to reduce it. By some calculations, it would take about a century to remove 5% of plastics currently in the oceans using only clean-up devices.